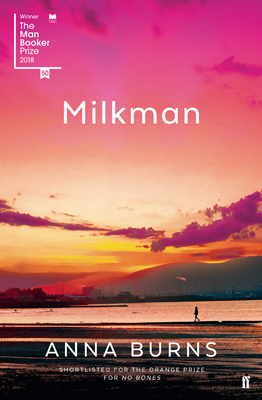 At a time when the Booker Prize has just been controversially awarded to two authors, Margaret Atwood and Bernadine Evaristo, I thought it might be an opportune moment to share with you my opinion of last year’s Booker Prize winning novel, Milkman by Anna Burns.

Anna Burns was born in Belfast and raised in the working-class Catholic district of Ardoyne which gained notoriety due to the large number of incidents during the Troubles. Milkman, like her previous two novels is set against a backdrop of violence division and retribution.

Having never been to Northern Ireland, my knowledge of the Troubles has been limited to what I have see in the British media so I’m in no position to say whether the communities depicted in Milkman are an actual reflection of the reality of the time, however, I would like to think that the novel has helped me to understand the issues which touched these communities a bit better than before I had read it.

The book is experimental in the respect that it has no character names. The protagonist is ‘middle sister’ and the other characters are referred to either by their relationship to the protagonist and her family or by the way the community views them, for example, ‘issue women’ or ‘real milkman’ as opposed to just ‘milkman’ a man much older than the protagonist who begins stalking her.

This novel is a humourous and enlightening look at what was clearly a very difficult period in the history of the people of Northern Ireland and I would recommend to anyone interested in literary fiction.

It certainly kept m away from writing for a while.

M J Dees lives and works in Sao Paulo, Brazil with his wife, daughter and two cats. He has written three novels, Living with Saci, The Astonishing Anniversaries of James and David, Part One, and When The Well Runs Dry. He is currently editing the fourth and writing the fifth. You can sign up for more information on his book launches at http://eepurl.com/cTnAD5 and receive a free copy of Living With Saci.
View all posts by M J Dees →
This entry was posted in Uncategorized and tagged anna burns, bernadine evaristo, booker prize, margaret atwood, milkman. Bookmark the permalink.