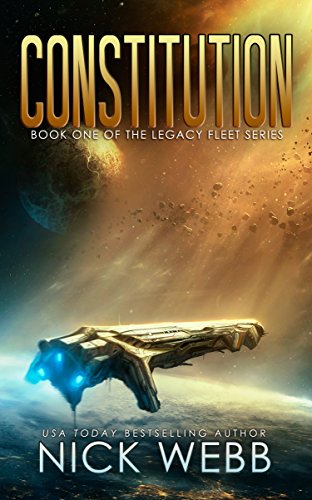 If you like Rusky bashing, space wars and alien threats then this is definitely the book for you. In the top ten Kindle books in space exploration, colonisation and metaphysical science fiction, Constitution obviously appeals to a large audience and as the first in the Legacy Fleet series, there is plenty more where that came from.

The book has over 1,600 5-star reviews on Amazon.com and in his bio, Nick claims that he became a scientist so that he could build starships. He laments that Unfortunately, his ship is taking longer to build than he’d hoped, so fictional starships have to do for now. He also says he is busy on social media,  tweeting and facebooking about Nasa, science, space, SciFi, and quoting Star Trek II from his home in Washington state.

I listened to the book on Audible because I wanted to see how one of the best selling science fiction books compared to the series of sci-fi novellas that I’m currently writing. I have to admit that my own series is more light-hearted than Nick’s book which is a patriotic alien bashing of the kind you would expect from a blockbuster movie like Independence Day. Perhaps one day they will adapt the series for the screen.

The first of my own novellas, THE DOOMED PLANET, has already gone out to the beta readers and I hope to be able to reveal some cover options in the next week or so. The actual launch date is December 6th. The sequel, SHIPMENT TO DAPHNIS, has also gone out to the beta readers and should be launched early January. I am still editing novella three, ROCKET TO TRINCULO, which should be launched early February.

Watch this space for more information.

M J Dees lives and works in Sao Paulo, Brazil with his wife, daughter and two cats. He has written three novels, Living with Saci, The Astonishing Anniversaries of James and David, Part One, and When The Well Runs Dry. He is currently editing the fourth and writing the fifth. You can sign up for more information on his book launches at http://eepurl.com/cTnAD5 and receive a free copy of Living With Saci.
View all posts by M J Dees →
This entry was posted in Uncategorized and tagged constitution, legacy series, nick webb, rocket to trinculo, shipment to daphnis, the doomed planet. Bookmark the permalink.